Donate to our platform now

London Real has launched our new DIGITAL FREEDOM PLATFORM a censorship free, independent broadcasting system, that is “Of the People, By the People, For the People”, and available exclusively through our website at LondonReal.tv to livestream content that would be banned, deleted, and censored by the Silicon Valley technology giants including YouTube, Facebook, Instagram, LinkedIn and Twitter.

To show your support of the Digital Freedom Platform, we are offering a number of levels to support us, including:

THE SIX PHASES OF THE DIGITAL FREEDOM PLATFORM 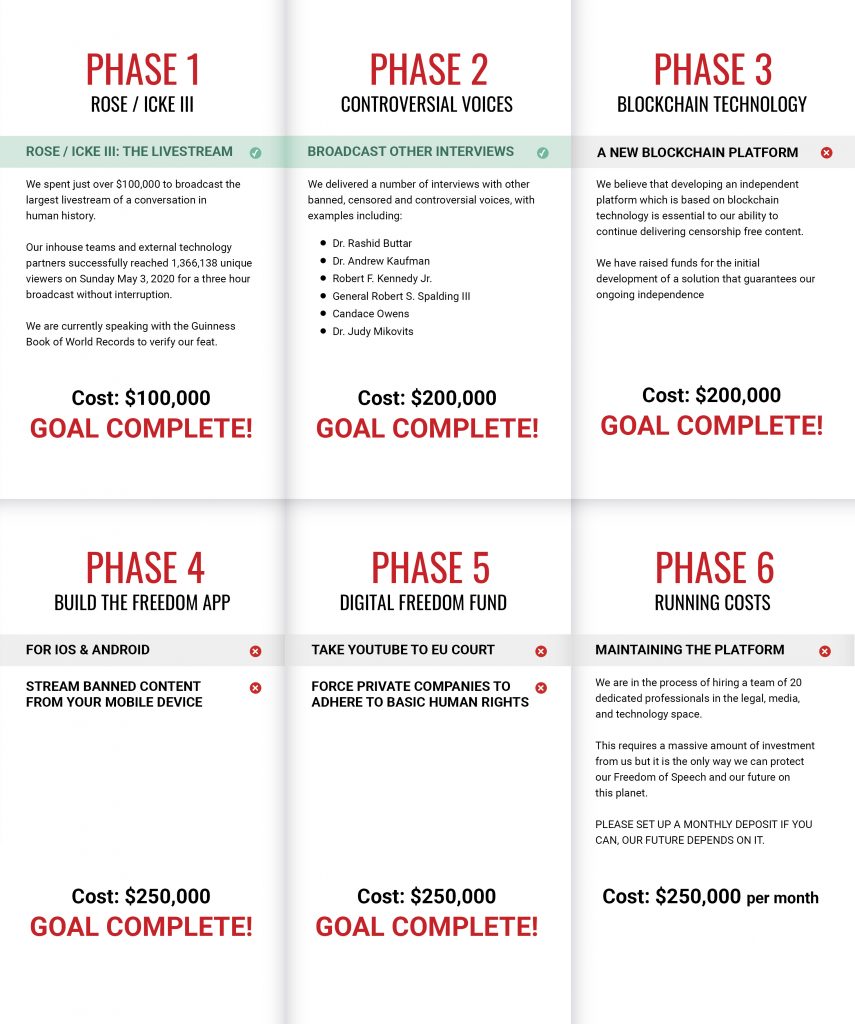 Thank you for stepping up and joining me to fight on the front lines for our most basic fundamental human right to Freedom of Speech.

Because of your support we have smashed through our initial fundraising goals and successfully broadcast our 3-hour conversation ROSE/ICKE III on May 3 to 1,366,138 unique viewers, spreading our message of freedom and truth on the LARGEST LIVESTREAM OF A CONVERSATION IN HUMAN HISTORY.

This is an incredible feat and only possible because of your sacrifice and patronage as a member of the London Real Army. We are deeply moved and grateful for your support.

Now is a critical time as we all bear witness to our civil liberties being eroded every day. We are under attack by dark and powerful forces that oftentimes disguise themselves as governments, regulators, and technology platforms.

But regardless of the enemy, make no mistake: we are in the midst of an Information War.

And unlike conflicts of the past, this is a war being waged inside your own living room, inside your electronic devices, and inside your brain. And do you know the best part? You didn’t even know it was happening.

The recent censorship of London Real has shown the world that Freedom of Speech is now an anachronism, a concept apparently lost in time that no longer has relevance. Our forefathers would be ashamed.

Today the digital social media platforms are the only modes of mass person-to-person communication, and now they are being systematically co-opted to become tools of censorship, intimidation, discreditation, and misinformation.

ALL OF THIS MUST STOP NOW.

Which is why we created the Digital Freedom Platform, a censorship free, independent broadcasting system, that is “Of the People, By the People, For the People.”

Our initial crowdfunding campaign was a massive success, generating over $1 million thanks to the generous donations of over 27,000 of our Founding Members and true digital patriots. This made a clear statement to everyone watching: that the London Real Army will fight to ensure our human rights are NEVER AGAIN compromised.

Honestly the scope of the donations was completely humbling. I have never been a man to ask for help and in the entire nine year history of London Real I never asked for a single dollar of donations. I always believed I should and could do it alone.

But I was wrong. We can only wage this war together.

We all know that “with great power comes great responsibility” and I feel that weight on my shoulders. I wake up knowing that every single day I must fight for our collective freedoms and I take this duty very, very seriously.

Below I have outlined the expenditure plans for our first round of fundraising broken down into the Five Phases. I have also added an additional Phase Six as an ongoing monthly fundraise to allow us to create an entire team of designers, developers, lawyers, and publishers to TAKE THIS FIGHT TO THE ENEMY.

I don’t believe in playing small. It doesn’t work and the enemy doesn’t respect it. In order to win this battle, and that is the ONLY option, I plan to build an infrastructure unseen before in a digital new media startup.

But let me warn you: this war is not for everyone. It takes courage and strength and trust.

Among us there will be controlled opposition and I guarantee these forces will be deceptive, divisive, and disruptive.

SO PLEASE I’M ASKING FOR YOU TO GIVE ANYTHING YOU CAN AND HELP US CONTINUE TO DELIVER TO YOU THIS IMPORTANT CONTENT ON A WEEKLY BASIS.

PLEASE SET UP A MONTHLY DEPOSIT IF YOU CAN, OUR FUTURE DEPENDS ON IT.

If you choose to become a Founding Member then you must be all in, and support the decisions we make behind the scenes to fight for freedom. Oftentimes we cannot disclose our plans or they will be thwarted by the powerful forces working against us. I’m asking you to trust us and the process and we will deliver.

And if you are one of those individuals who chooses not to support us in this fight, that is fine. We will fight for your freedom regardless, and perhaps one day in the future you will thank us.

I want to finish by extending my gratitude to each and every one of you for sacrificing so much to help us spread the truth, to fight for our fundamental human right of Freedom of Speech, and for supporting our message in the face of such strong opposition.

I promise you, we will prevail. 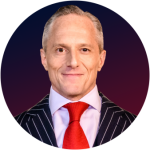 The following is a status update of the Digital Freedom Platform and a summary of the allocation of funds to date. As of this writing we have raised a total of $1,333,000 to be invested in all aspects of the platform with the amount details listed below.

We spent just over $100,000 to broadcast the largest livestream of a conversation in human history. Our inhouse teams and external technology partners successfully reached 1,366,138 unique viewers on Sunday May 3, 2020 for a three hour broadcast without interruption. We are currently speaking with the Guinness Book of World Records to verify our feat.

We continue to invest in and build our technology team who will develop streaming relations with multiple providers in order to create a new technology platform that will be bulletproof, thus allowing us to choose a variety of streaming options depending on the effectiveness of the controlled opposition.

The Digital Freedom Platform continues to broadcast groundbreaking live content that would otherwise be banned, deleted or censored by the trillion dollar Silicon Valley behemoth social media platforms as well as the mainstream media. Episodes completed so far include:

Going forward we plan multiple broadcasts from the Digital Freedom Platform every single week and appreciate your support in spreading the word about these important messages.

The only way to ensure that our content will always remain available ad infinitum to our users is by employing the use of blockchain distributed ledger technology. Our content will soon reside on a database that exists across several locations and among multiple participants, therefore giving it the redundancy necessary to ensure that there is no single point of failure.

Our freedom app will give users the convenience of watching our live streamed broadcasts on IOS or Android without having to endure web browsers, player incompatibility issues, or long loading times.

With the Freedom App, everything you need is available at the touch of a finder, from previous live streamed episodes to community comments to additional resources to Q&A material to downloading options, it will all be conveniently located on your phone, always.

There is still one place where our human rights and legal precedents are respected, and that is in a court of law. But this takes a tremendous amount of financial resources to even file basic letters of action, let alone fully fledged lawsuits.

So we are proceeding with preliminary legal action against two large technology companies, with more details to follow when they can be disclosed to the public.

Upon initial consultation with solicitors in London, we discovered a precedent that holds private companies accountable to an EU Human Rights Law WHEN THESE COMPANIES ACT AS PUBLIC UTILITIES, which these digital platforms clearly are. So we are proceeding accordingly.
We are also creating a consortium of lawyers worldwide to fight these companies locally and take advantage of any laws guaranteeing the rights to Freedom of Speech.

We are in the process of hiring a team of 20 dedicated professionals in the legal, media, and technology space. This requires a significant amount of investment but it is the only way we can protect our Freedom of Speech and our future on this planet.